The Wedding Supper of the Lamb - Revelation 19:7-9

Revelation 19:7-9 says, Let us rejoice and be glad and give honor to him, for the marriage of the Lamb is come, and his wife hath made herself ready. And to her was granted that she should be arrayed in fine linen, clean and white: for the fine linen is the righteousness of the saints. And he saith unto me, write, blessed are they which are called to the marriage supper of the Lamb. And he saith unto me, these are the true sayings of God.

The book of Revelation is a future book, and from chapter four on, it is written specifically to those who will be living during the times of The Beginning of Sorrows and The Great Tribulation. At the time of this writing, there is still time to accept the marriage proposal and attend the wedding as the Bride!

Missing the wedding could prove to be fatal. Missing the reception (marriage supper) will definitely be fatal.

The message in Revelation 19:7-9 is two-fold. We read about the Lamb’s wife, who has already made herself ready. And we see a reference to those who are invited to the Marriage Supper.

We know this, because we see the Lamb’s wife coming out of Heaven with Jesus at the time of his return. In verse eight, she is arrayed in fine linen. Compare that with verse fourteen, which portrays the armies of Heaven leaving Heaven with Jesus on their way to the battle of Armageddon (see the rest of the chapter). They are arrayed in fine linen. The Lamb’s wife is included in the armies of Heaven, and will participate in the battle of Armageddon.

The marriage takes place in Heaven. But when did the Lamb’s wife arrive in Heaven? A couple of passages answer this question for us:

The marriage supper (the reception) takes place on earth—after both the battle of Armageddon and the Judgment of the Nations is completed. Those invited to the reception are a completely different group than those who came out of Heaven with Christ, and comprise those who did not accept the original marriage proposal but endured to the end of The Great Tribulation. They missed the wedding altogether, but survived The Great Tribulation and survived the Judgment of the Nations (which immediately follows the battle of Armageddon), and are blessed to attend the reception with the Bride and Groom.

Blessed are they which are called to the marriage supper of the Lamb…. 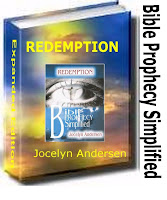 E-book is a FREE download. Bible prophecy is all about redemption, and the book, Redemption: Bible Prophecy Simplified, presents us with a panoramic and chronological overview of God's plan of redemption for our souls, bodies, and this earth as revealed in scripture. The day The Towers Fell was prophesied in the Bible. The basket of currency connected with the Euro is found in the Bible. Details concerning the Rapture, The Great Tribulation, and the first 1000 years of Christ’s reign on earth are looked at from the unique perspective of the seven prophetic feasts of the Lord found in the book of Exodus. Bible Prophecy Simplified is simple enough for beginning prophecy students, but there is plenty to intrigue intermediate and advanced students as well. The Bible reveals methods the antichrist will use in his rise to power and the location of his home base.

Jocelyn Andersen, is Founder and Pastor of Hungry Hearts Ministries. She ministers in preaching and teaching as well as in writing, and through her 24/7 Bible Talk Radio station, HungryHeartsRadio.com. She is the author of several Christian books, including the short but powerful booklet entitled, Jesus, God of the Burning Bush: Eternal Father & Beloved Son. Follow her on Facebook, Twitter, Instagram, or LinkedIn.
Posted by Jocelyn Andersen at 8:37:00 AM