Contemplative spirituality (also known as Paschal Spirituality) is the teaching that spiritual growth and true spirituality occur by contemplation not of Scripture or even of scriptural themes, but contemplation of God through emptying your mind.
This movement began in the Roman Catholic Church
Contemplative prayer, Centering Prayer and Soaking Prayer are all the same thing. Those who practice such things are called mystics.
Contemplative prayer is a practice derived from Eastern mysticism. More and more Christians are turning to Mysticism.
The desert fathers (Roman Catholic monks) are the fathers of contemplative prayer in the west.
Mantra meditation is the basis for contemplative prayer.
Francis Schaefer defines Mysticism as nothing more than a faith contrary to rationality, deprived of content and incapable of communication. You can bear witness to it but you cannot discuss it."
Mystics claim that God cannot be defined by systems of doctrine. They maintain that western rationalism has crushed the knowledge of God and that we must return to a more intuitively (non-biblically) received knowledge.
The New mystics maintain that all religions should immerse themselves in the myths of their tradition because there is power in the "collective unconscious"
For the New Mystics, the use of biblical language bears no resemblance to the faith taught in the Bible. For example, the call to salvation is actually a call to a transformation of consciousness to be psychologically awakened to the unity and oneness of all creation.
Contemplative Spirituality Promotes Universalism and emphasizes ecumenism
Those who embrace contemplative spirituality eventually graduate to ecumenism which deepens over time to an extreme ecumenism which includes non-Christian religions and all "faith groups." The gospel of Scripture is ultimately rejected and a view that all are saved (universalism) is adopted.
The New Mystics frequently use the phrase "unconditional love" to express universality.
Thomas Merton (popular among protestants) a roman catholic contemplative author, says one can work within the Christian traditions but view universalism as the broader truth
Brennan Manning (popular contemplative author) in his Ragamuffin Gospel teaches that the life, death, and resurrection of Christ mean that all are redeemed. I. E. no one needs to get saved—all are already saved because of what Christ did.
Brennan Manning understands the deeper issues of contemplative spirituality. He writes: It is important to realize that when contemplatives speak of knowing God as your Father/Abba, they are not referring to regeneration. They are referring to achieving a level of intimacy with God, "intimacy with Abba." They view all people as heaven bound. The issue for them is becoming a mystic whose experience of God transforms the life and hence the world. Their ultimate aim is to usher in a new world.

Manning's attitude toward the Bible: “I am deeply distressed by what I only can call in our Christian culture the idolatry of the Scriptures. For many Christians, the Bible is not a pointer to God but God himself. In a word-bibliolatry. … I develop a nasty rash around people who speak as if mere scrutiny of its pages will reveal precisely how God thinks and precisely what God wants (pp. 188-89). 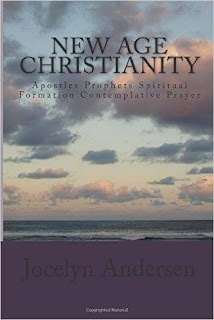 Over the past 12 months, I have heard more people describe themselves as "spiritual" than at any other time in my life. And the interesting part is, that those describing themselves as such do not even claim to be saved--although one did admit to carrying a Bible while traveling (sort of as a good luck charm?).

According to 2 Corinthians 2:12-16, being spiritual is defined as having the mind of Christ and being taught by the Holy Spirit of Almighty God.

1 John 1:1-4 informs us that there is certainly more than one spirit we can be influenced by and instructs us in the only way to tell the difference between the Spirit of God and spirits of the world who counterfeit the spirit of God. 1 John 4:3-4 goes into great detail in identifying the spirit of antichrist, which is the spirit of the world, and verse 4 clearly states that anyone who denies that Jesus Christ is come is not of God.

Because of the tense this verse is written in, it makes very clear the fact that Jesus not only came, but when he arrived, he was already the Christ. This rules out the concept of many Christs in conjunction with what is known as the "Christ Consciousness. It is very important to understand this fact as there are many who teach that Jesus was not the only Christ. Jesus himself warned that many false Christ’s would come. Fortunately the scriptures give a foolproof method for identifying the true Christ among the plethora of false Christs.

So believe not every spirit! But test the spirits to see whether or not they are of God.


Part of this article was excerpted from the book, REDEMPTION: Bible Prophecy Simplified, which is free for download at www.Lulu.com/JocelynAndersen Print copies for your reference library or to be used as gifts are also available at Lulu.com. To read more articles by Jocelyn Andersen, visit www.HungryHeartsMinistries.com .
Posted by Jocelyn Andersen at 3:08:00 AM No comments:

It may surprise modern-day Christians to know that the Holy Scriptures are inerrant. Below is a statement found in the majority of Statements of Faith these days:

Is anyone aware that if a statement like this is true, then we would all do well to trash all of our Bibles. At the very least, regulate them to the, "Confucius Says..." category. Because, according to this statement, only the original autographs are inerrant, and there are no original autographs in existence today.

Thank God those who write such blasphemous nonsense into their statements of faith are wrong. The scriptures are clear that God promised to preserve his word to every generation. That means that the generation of today still has the inerrant Word of God.

Even though none of the original autographs have survived the centuries. The infallible, indestructible Word of the God--The Bible--has.

For details visit www.Lulu.com/JocelynAndersen and read Bible Version Debate: Why? The book is offered free for download. A print copy is available to share with your friends and family.

The Church is Selling: Who's Buying?

Money is the bait. Ancient, "historic," Christian traditions is the hook. Contemplative spirituality is the line. And a paradigm shift straight into a panentheistic hell is the sinker.

I had been really stumped as to how certain blatantly unbiblical heresies have managed to take root within the evangelical Christian Church to the alarming degree that they have, until I stumbled upon [at least part of] the answer while researching something else entirely.

I was following the money trail on some interfaith organizations that put on a big show of being "Christian" (but are certainly not the brand of Christianity we find in the Bible), and to my amazement, I found that a common denominator in many of the financial grants, bestowed upon so-called "Christian" outreaches, included a stipulation that the grant recipient commit to the restoration of ancient, historical Christian traditions.

In application and experience, there is little to no difference between transcendental meditation and contemplative prayer. Contemplative prayer is transcendental meditation. But instead of repeating "ooom," or whatever, the "Christian" meditator might repeat the name "Jesus" or one of the various names of God (or a short Bible verse). The end result for the Christian however, is identical to that of the Hindu or any other practitioner of eastern mysticism. If the Christian mystics get it just right, they will achieve a state of altered consciousness. And if they get it really right, they might even experience a good high. They eventually become awakened to the unity and oneness of all creation, and come to the lofty [though unbiblical] understanding that God is in every one and everything (would that understanding facilitate an acceptance of a one world religion?).

Back to the money, since the Bible obviously does not support "Historic Christian Traditions," and is not a major, or even minor, component in leading protestant evangelicals down the contemplative path to mystical oneness. It seems there are those with deep pockets willing to take a crack at buying out evangelical Christianity. And they do not seem to be hurting for customers.

Take, for instance, The Lilly Endowment Clergy Renewal Program which has at its core, a commitment to recover the wisdom of the Christian tradition for our contemporary situation (that's code for contemplative). The foundation boasts of investing more than $29 million dollars into more than 700 congregations since the year 2000. The Lilly Endowment also feeds other grant foundations which are "enriching contemporary religious life by an appreciative recovery and critical re-appropriation of the riches of the Christian tradition."

Congregations are being paid handsomely, through grant monies, to allow their pastors the "privilege" of attending clergy renewal retreats where they can travel, worship, explore their faith, and recover the wisdom of historic Christian traditions together with leaders from many denominations and quasi-Christian religions.

The hopeful result of these retreats is of course to bring Christian leaders into a more ecumenical and universalist mindset, which would logically be the first step to ultimate acceptance of a one world religion, which would conceivably include all faiths and religions.

In looking at the retreat rosters for the year 2000, I expected to see Universalists, Unitarians, Roman Catholics and some of the more ecumenical protestant congregations participating in the clergy renewal programs. And I did see them. But I was shocked to see that, from the very beginning, traditionally conservative Christians such as Baptists and Mennonites were among grant recipients and retreat participants as well.

What is worse, the number of conservative congregations selling out by sending pastors on these heretical retreats has been steadily increasing, with each passing year seeing more and more denominations participating. Among grant recipients for the year 2007, there were many more Baptists than were represented in the year 2000. There was more than one Mennonite congregation, a Moravian congregation, and a Church of God.


The following is an excerpt from the National Clergy Renewal Program 2014 press release:

“Since 2000, more than 1,900 congregations across the nation have received grants in the National Clergy Renewal Program to support the renewal programs of their pastors. Congregations in the 2014 program received grants totaling more than $5 million. Christian congregations were invited to apply for program grants of up to $50,000. Up to $15,000 of the grant could be allocated to fund interim pastoral leadership as well as to support renewal activities within the congregation.”

The number of conservative congregations selling out by sending pastors on these heretical retreats has been steadily increasing, with each passing year seeing more and more denominations participating. The list of 2014 grant recipient denominations includes:
All of these received up to $50,000 in exchange for sending their pastors on an extended sabbatical which included a clergy renewal retreat.
This is frightening.
And the Lilly Endowment is not the only philanthropist organization buying out the Christian Church. There are many organizations bestowing big bucks in the form of grant money on Christians willing to sell their birthrights for bowls of pottage.

It is as our Lord said the love of money truly is the root of all evil.
Posted by Jocelyn Andersen at 8:40:00 AM 1 comment:

The Midnight Cry: Evidence of a Pre-Trib Rapture

"And at midnight, there was a cry made, Behold the bridegroom cometh: go ye out to meet him...and they that were ready, went in with him to the marriage, and the door was shut...Watch therefore, for ye know neither the day nor the hour the Son of Man cometh"
Matthew 25:1-13...Read commentary on this passage at:
http://rapturerevelation.blogspot.com/2008/02/matthew-251-13-midnight-cry.html
Posted by Jocelyn Andersen at 1:21:00 AM No comments: