Must Christians Obey the Law of Moses

Are Christians Required to Obey the Law of Moses?
Galatians 5:9 tells us, “A little leaven leavens the whole lump.”
Just as a small amount of leaven permeates an entire loaf, not just a certain portion of it, trying to mix even a small amount of law with faith results in obliging an individual to observe the entire law—a dangerous practice according to the Bible, which says the mixing Law and Faith has the undesired effect of making Christ of no effect at all in one’s life Galatians 5:3-4.

Galatians 5:9 reveals that the leaven represents the Law of Moses, and during the feast of Unleavened Bread the people are commanded to put away all leaven from their homes.
In Galatians 4:24, Hagar the bondwoman was a scriptural allegory representing the Mosaic Law. Abraham was commanded to cast out the bondwoman and her son.

Question: Since that was the case, why was the law necessary in the first place?

Answer: In order to protect 'âdâm until the redeemer could come, God revealed his ways to Moses and gave him ordinances (laws) to keep. The law not only revealed Christ, but also guarded and protected all who submitted to it until faith (Christ) came Galatians 3:23-24, 4:4-5, Psalms 103:7.

The first man and the first woman needed to obey only one commandment before the fall, but the introduction of sin into creation mandated the need for many ordinances that foreshadowed the Redeemer, and, like the Tree, were also given for protection. The prophetic aspect of the Law acted as a tutor or teacher (schoolmaster) to bring to Christ Galatians 3:23-25, Revelation 19:10.
Since the resurrection of Jesus, we are no longer under a schoolmaster (the Law). Jesus fulfilled all the requirements of the Law for us, and became the end of the Law for righteousness to all who believe Romans 10:4, Galatians 3:25, Colossians 2:14, Romans 10:4.
The feast of Unleavened Bread and the traditions associated with it accurately predicted the putting away of the Law of Moses.
The fact that the feast of Unleavened Bread, where the Law of Moses was symbolically swept away while Christ’s body still lay in the grave, effectively refutes the notion that Jesus had to suffer in hell for our sins. The sin price was paid in full before he was ever taken down from the cross. While he yet lived, just before he released his hold on life, our savior uttered the words, IT IS FINISHED (PAID)! Exodus 12:15, John 19:30
No other atonement or penance on Jesus’ part was necessary.
It is worth noting, again, that during the Feast of Unleavened Bread no servile work was to be done. This foreshadowed the time when forgiveness of sins would be available without the works and sacrifices of the law.

**The entire Bible can be read every year by reading just four chapters a day. It is recommended to read your Bible prayerfully, always picking up today where you left off yesterday.

The article above is an excerpt from the book, Redemption: Bible Prophecy Simplified 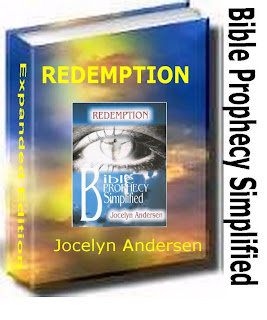